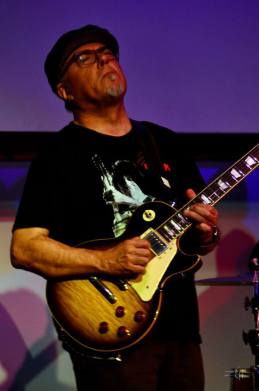 He keeps working in his studio, creating music for TV commercials around the world. He also continues the musical direction of his backing group for several singers, touring Spain every summer. In January 2007, his second album Oasis, 1980, which had only been released on vinyl, went on sale in CD format, remastered by Santi. Later on, his other discography followed. In 2007 he started working on the looping technique, offering some solo concerts, accompanying his music with the projection of images by the artist Tomás Gilsanz. The debut was in 2007 at Razzmatazz in Barcelona, as support for the British group Marillion. In 2008 he gave a concert in the Olympic Museum of Barcelona together with Michel Huygen (Neuronium). In 2009 within the 20th Guitar Festival he presented at Luz de Gas in Barcelona their new proposal Loop Project along with Adrià Grandia’s hurdy gurdy. In January 2010 they published their first CD Loop Project. In 2011 Silvia Isach joined Loop Project and at present is in charge of projecting images in real time, thus enhancing the visual aspect of the show. From 2012 onwards he returned to one of his favorite genres: blues rock, first with Plan B, an instrumental group of versions of classic blues and R & B, and later he forms Mr Sixty, a band of blues rock with whom in 2016 they record their first album, Secrets that we share, with some original songs and some covers.