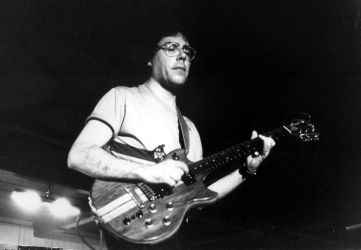 During the 80s he continued his activity with his band as well as his collaborations with other musicians and performers. From his early solo work he showed great interest in exploring the sonic possibilities of the guitar, working with all kinds of devices. He was one of the pioneers in the use of the synthesized guitar in Spain and from his second album he included it in recordings and live performances. By this time he began his collaboration with the electronic music band Neuronium (Michel Huygen), taking part in several recordings and performances around Spain and Europe, among which stand out those in Sheffield (UK Electronica Festival) and the London Planetarium in 1984. By this time he launched his first recording studio "Sonocentro", which recorded a lot of bands and soloists of the time. In 1985 he created the show “La historia de la guitarra eléctrica” ("The History of the Electric Guitar") with which he and Frank Mercader, at the head of their band, toured for two years the schools of Catalonia.